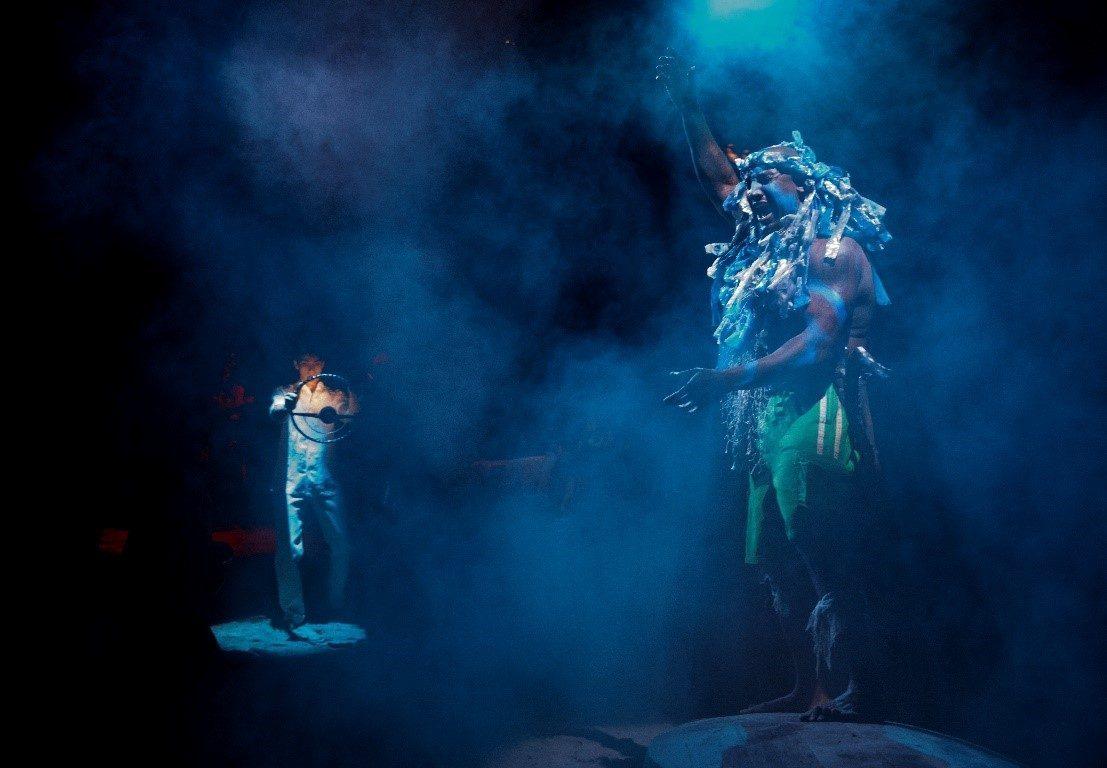 Broadway’s ‘Once on This Island’ Will Grab Your Heart; Tyler Hardwick Gets Personal On Breaking Into the Industry

It’s not often that we have a Broadway show that tells a universal tale that transcends race, uniquely exploring gender roles, all while providing an immersive viewer experience in today’s political and social climate. On its national tour, “Once on This Island,” officially opened in Nashville, making its second stop in Dayton, Ohio as part of the Victoria Theatre Association’s Premier Health Broadway Series.

As part of its partnership with the Victoria Theatre Association, Grit Daily continues to bring readers onto the stage of Broadway’s latest theatrical performances, most recently with The Book of Mormon. The latest production coming to Dayton, Ohio is the 2018 Tony Award-winning revival of composer Stephen Flaherty and lyricist/librettist Lynn Ahren’s 1990 musical “Once on This Island.” The Broadway musical based on Rosa Guy’s novel “My Love My Love.”

Beginning on a hurricane ravaged Caribbean island, Once on This Island tells the story about how one seemingly insignificant girl, Ti Moune (Courtnee Carter), falls in love with wealthy Daniel (Tyler Hardwick), bringing two world’s colliding into one another, bringing about our society’s most realistic (and unfortunate) fears that deeply explore age, colorism, gender roles, discrimination, race, religion, and sexuality.

We attended the Media Viewing on October 22 and were taken completely by surprise at the power and spirit this production puts on. In attempts to re-create the New York City Broadway experience, several members from the audience had the opportunity to actually sit on the stage and become part of the performance itself. We haven’t seen a production incorporate the audience into its work in this manner…ever?

Carter and Hardwick’s performance was a breathtaking reminder that we all have our own destinies here on this Earth, and for whatever purpose each and everyone of us was placed here for, we must each follow our hearts and see our journey through. Whether that be a higher power, a strong emotional connection, or just a gut feeling…the powerful vocals that each member of the production, along with the inexplicable dance choreography was absolutely mesmerizing in every sense of the word. It gives Dancing With the Stars a run for its money.

If you’ve ever been in love or watched the one you love with someone else, it is truly something magical to see how the higher powers are guiding each and every one of us on our journey to be the best person we can be. And what do we have to show for it? Love–in whatever form, will conquer bad energy.

It is with the assistance from the powerful island gods Agwe (God of Water), Asaka (Mother of the Earth), Erzulie (Goddess of Love), and Pape Ge (Demon of Death), that Ti Moune’s quest to win Daniel’s heart forever changes her entire world, parallel to the fate of everyone residing on the island.  Well you better believe things will get interesting anytime a “demon of death” is involved in the picture.

“It is my hope that the story of Ti Moune might inspire any person, regardless of age, gender, race, ability, sexuality or circumstance to become catalyst for change; that through how they give and share love, they might inspire the tearing down of walls and not the erecting of them. I am so very proud of this company of artists and thrilled that they will be sharing this story with audiences around this great and hopeful nation.” –Michael Arden, Director

When the development of the show began in 2015, the world was undergoing an ever-growing number of natural disasters—from the unrelenting storms and earthquakes in Haiti, to the refugee crises at our own border and around the world, Hurricane Katrina in New Orleans, and more recently, the devastating tornadoes in the Bahamas, Texas, Ohio, Florida, and Puerto Rico.

“By the time you read this, there will undoubtedly be more to add to this heavy list,” Arden added. “It would seem no place or person is immune to the power and wrath of the gods.”

And Arden couldn’t be more correct. On Sunday night, the residents of the Dallas-Forth Worth area in Dallas, Texas, experienced a devastating tornado, leaving many without homes.

Behind The Scenes With “Once on This Island’s” Tyler Hardwick

Hardwick returns to Once on This Island, previously playing the role of the Storyteller, and has appeared in other works, including, but not limited to Motown the Musical (Eddie Kendricks), Dreamgirls (C.C. White), and NBC’s The Blacklist.

Grit Daily: How did you get started with “Once on This Island?”

Tyler Hardwick: Four years ago, I was doing a production of Little Dancer, which is now called “Marie, Dancing Still,” written by Lynn Ahrens and Stephen Flaherty, who also wrote “Once on This Island” as well. I got to know Lynn Ahrens, and I approached her and told her my interest in “Once on This Island,” and thought I would be a good fit in the production.

I told her I was very interested, and she agreed. We let the whole idea go, because you can’t be attached to any one project in this career. Four months later, I got an email from my agent while I was in Korea doing a production of Dreamgirls, that I had an audition to do a self-tape for “Once on This Island.” I did that and that brought me to the workshop of the show, which eventually led me to the Broadway production.

GD: Would you say there is a certain way to go about networking with individuals in this industry, such as Lynn Ahrens? Is there a certain demeanor a performer takes when networking?

TH: For me personally, I never approach anything with the idea of trying to get something from someone. I think that this world and a lot of people in this business approach it like that. I personally like to get to know the people personally, and have them get to know me as a person, and hopefully through that genuine time, they get to recognize my passion, gift, talent, my good-person, and hopefully the stars line up after that and I have a great job.

GD: As a performer, what has been the most challenging part of your career?

TH: The hardest part is trying to get to the next level, once you’ve achieved the next level. I want to be a lead on Broadway, to originate roles—I want to create and do television and film. I started in the ensemble, and now I’m doing a principle leading role in a tour, which is amazing. The next level I hope to get is a leading role on Broadway. You’re always striving to do more, more, and more. I am not a settler, and I will achieve those things, and I’m determined and hopeful. But it’s also realizing the difficulty of that and the lack of control I have in achieving that in terms of having other people to also agree with my ambitions.

GD: On the flip-side, what would you say is the most exciting part about being a Broadway actor?

TH: As a performer, the most exciting experience was that I’ve gotten to be part of the first African-American cast in Korea doing Dreamgirls, so we got to make some history there. I have been able to travel the country and around the world, which was very exciting, and things I would not be able to do alone, as much as I’ve traveled.

GD: What would you say is most exciting about “Once on This Island?”

TH: I was able to cross off MANY MANY things off my bucket list in terms of performing on the Macy’s Thanksgiving Day Parade, the Tony Awards—which we won the Tony Award for Best Revival in 2018, we got to perform on Seth Meyers, and a little segment on Good Morning America. I’ve been able to do a lot of things I’ve never done before with this one production, so I feel very honored.

GD: What do you want viewers who are attending this musical in Dayton to take away from the production?

TH: That anything is possible. You always have circumstances, but you can always go beyond those. You can always contribute. One person in this world can contribute so much. I want them to take away the message of love, and how it transcends throughout the entire community. We work better and stronger as a unit, as a whole, as humans—opposed to individually.

GD: Aside from this production, do you have a favorite Broadway musical you support?

GD: What career advice do you have for those individuals trying to “break into” Broadway?

TH: It’s an endless race. Once you get to be on Broadway, there is still more to climb. I’ll take a quote from André De Shields who won a Tony Award for Best Featured Actor in a Musical for Hadestown—he said, “the top of one mountain is the bottom of the next.” I think it encompasses my answer to your earlier question about striving for more and getting to the next level. The work is never done, and there’s always more to do. Just keep on going and this has to be your 100% passion. If you love something else other than acting, do that, because I’m sure it will bring you far more happiness or content, because this industry is very hard. I’m still in it because I absolutely love it and love the work. This is my calling. I encourage everyone who recognizes this as their calling, keep trudging ahead.

So, What Are You Waiting For?

The musical will run at Dayton’s Schuster Center from October 22 to October 27, at 90 minutes