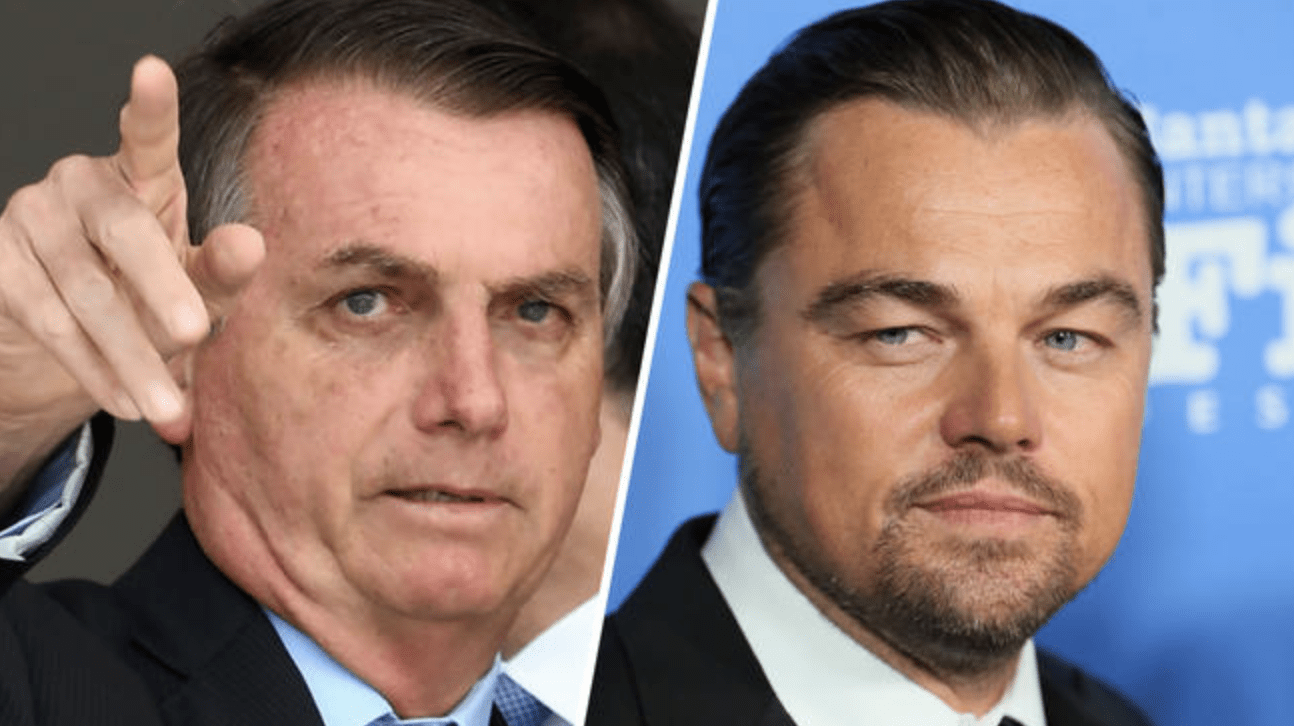 Bolsonaro made the comments on a webcast, claiming the star helped fund Nongovernmental organizations (NGOs) to set the forest fires earlier this year.

“DiCaprio is a cool guy, isn’t he? Giving money to set the Amazon on fire,” the president said.

But DiCaprio refuted Bolsonaro’s accusations and responded on Instagram, “at this time of crisis for the Amazon, I support the people of Brazil working to save their natural and cultural heritage.”

He  continued, “the future of these irreplaceable ecosystems is at stake and I am proud to stand with the groups protecting them.”

According to AP, federal prosecutors say their investigation points to land-grabbers, cattle ranchers, farmers and illegal loggers as prime suspects.

But in an effort to deflect responsibility, Bolsonaro’s government arrested four volunteer fire fighters of the Alter do Chão fire brigade, for allegedly starting the Amazon fires, taking photos and posting them on social media to receive unsolicited donations.

Bolsonaro said, “take photo, film, send it to an NGO, the NGO spreads it out, does a campaign against Brazil, gets in touch with Leonardo DiCaprio and Leonardo DiCaprio donates $500,000 to this NGO. One part went to the people who were setting the fire, right?”

And authorities claim “[the four men had] privileged information and images of the fires,” but local media report phone conversations did not prove the four men were behind the flames or committed any crime.

The BBC says these arrests are an attempt of the president’s far-right agenda, to persecute environmentalist and “critics claimed the operation was politically motivated.”

Brazilian Congressman, Airton Faleiro, told the press the government wants to blame the fires on NGOs instead of land grabbers, which environmentalists say are the root cause of the fires to clear land for farming and ranching.

Bolsonaro Says NGOs Want to Shine him in a Negative Light

“The NGO people, what did they do? What’s easier? Set fire to the bush,” he said, without providing evidence for his accusations.

This is not the first time Bolsonaro shy’s away and blames nonprofit groups for setting the Amazon on fire.

The World Wildlife Fund, the organization being questioned, denies ever receiving any donations from DiCaprio or photos from the volunteer firefighters.

During the rainforest fire, Bolsonaro claimed: “the information war going on in the world [is] against Brazil.”

However, the National Institute for Space Research (INPE) released data in June, confirming deforestation was up 88 percent than the previous year, but Bolsonaro said the data was false and ousted Ricardo Galvão, head of Brazil’s INPE, for attempting to make his administration look bad.

Both environmental groups Global Wildlife Conservation (GWC) and IUCN Species Survival Commission work diligently in the Amazon to prevent the destruction of the rainforest and released statements condemning Bolsonaro’s accusations.

“The Amazon rainforest is in crisis. Brazil has historically made impressive progress towards protecting its unique ecosystems,” GWC’s statement read. “…in the past few days, false accusations have been made to undermine environmental defenders and distract the general public from policies that directly lead to environmental disasters like those across the Amazon earlier this year.”

IUCN similarly commented on the accusations made and reaffirmed their active support in protecting the rainforest.

“As an umbrella organization committed to biodiversity conservation, we are concerned that there are increasing and targeted attacks on people and groups working to protect nature in the Amazon,” IUCN’s statement read. “Environmental defenders, whether in local communities, NGOs, or government agencies, should be afforded with the highest protection of the law in Brazil.”

Under the Current Administration Deforestation Has Risen

With a cabinet filled with climate-change deniers, agribusiness executives and brazil’s economy tanking, its no reason why deforestation increased nearly 30 percent, between August 2018 through July 2019. Making it the worse level of deforestation since 2008.

The Brazilian president also sees the Amazon as the nation’s greatest asset and wants to increase the countries beef and soy productions.

This requires clearing land, but while the soil is rich, it quickly depletes, making farmers cut down more brush, to reap the rainforest’s nutrients.

The Amazon, also called the “lungs of our planet” supplies over 20 percent of the earth’s oxygen supplies, making it one of many reasons environmentalist champion for its survival.