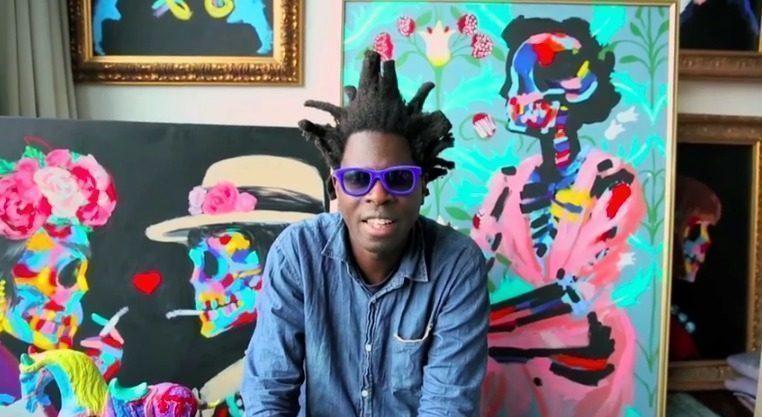 Karl Lagerfeld, Anna Wintour, and Marie Antoinette are just some of the icons of luxury and history that world-renowned artist Bradley Theodore features in his work.

But it wasn’t always that case that his work garnered so much attention. Beginning his career as a muralist on the streets of New York, Bradley’s work overlays vibrant, skeletal motifs on top of familiar images of the most celebrated figures of fashion and pop culture.

The self-taught artist learned his craft in the most modern of ways — through online observation of artists and their techniques. Over the course of countless hours of dedication to his work, Bradley forged a visual language for himself that has been able to be translated skillfully onto the canvas and onto new mediums that transcend traditional representations of art.

After his New York City murals began to shine a global spotlight on Bradley, companies from all over the world began to reach out to him for collaborations. One day, while he was painting a mural in New York, Bradley was approached by a man from Puma who had been looking for him. An initial conversation on the sidewalk evolved into a collaboration with the athletic-wear company that merged street art with fashion. Bradley has gone on to lend his visual language to companies like Rolls Royce and Moleskine but one of his most interesting projects has to be his collaboration with Google.

In 2017, alongside several other artists, Bradley was approached by Google to participate in the unveiling of their new virtual-reality app, Tilt Brush. Being an artist that cut his teeth in a way that it is unique to the 21st century, Bradley was the perfect match to explore the new technology from Google that enables users to create art in an interactive, 3D space through the advent of virtual reality.

Bradley’s highly sought after aesthetic features some recurring themes that make all of his work — whether it be on canvas, on a wall, or on a sneaker — unmistakably his own. Immediately you will be struck by the vibrancy of his color palette, something Bradley attributes to his roots in Turks and Caicos.

Then you will most likely recognize a familiar person — perhaps someone from the world of fashion or a prominent historical figure. You will then see the way Bradley breaks down this person into a chromatic, skeletal representation of themselves.

According to Bradley, the colorful skulls used in his work represent the person’s spirit. He has also said that the skeletons are a nod to the our common humanity that transcends race.

“When you see a skeleton, you do not think race, you just think human. Sometimes, we need to be reminded that we are all human.”

Recently, Bradley left New York and returned to his childhood home of Miami. The South Florida city is an art capital known internationally as one of the select cities that hosts the prestigious Art Basel fair. This year, the official Art Basel exhibition will run from December 5 through 8 and will feature acclaimed artists from all over the world.

Going a step further? Bradley Theodore will be on stage, December 6 at 1:00PM ET at Grit Daily Live! Miami Art Summit to dish on his latest work and share the latest news with Grit Daily Editor-at-Large Jennifer Matthews.

Right after Registration+Champagne, Bradley is a must see in action for every art enthusiast.