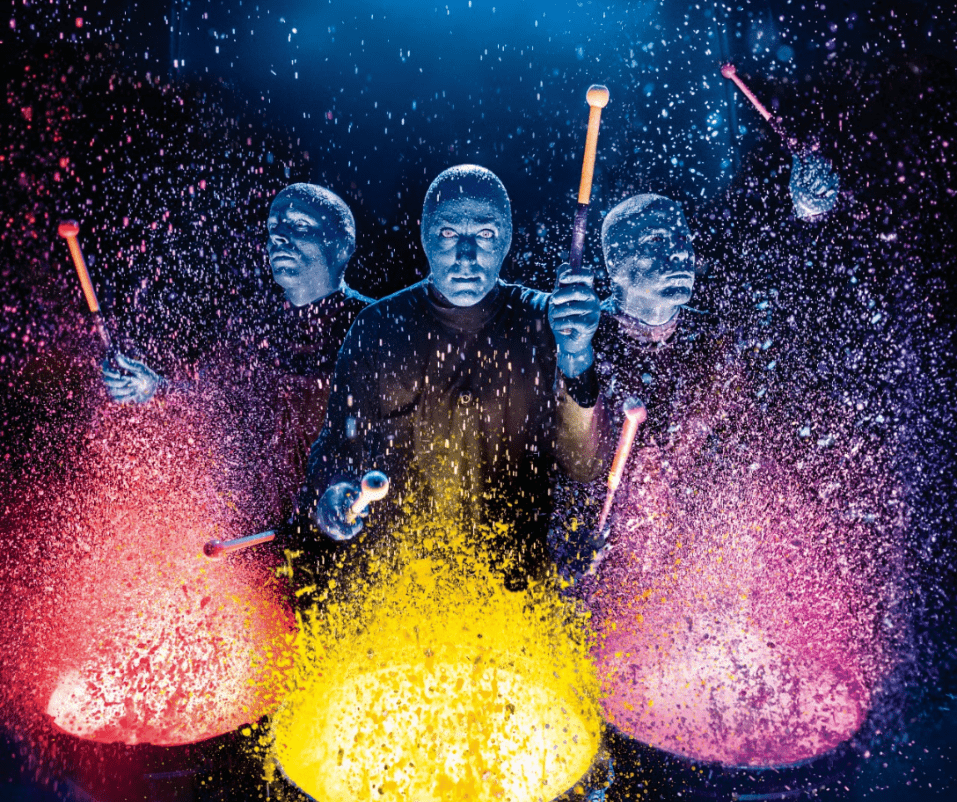 What began as street theater in New York City in the late 1980s has grown into a worldwide cultural phenomenon, where we are all living in a “blue” world. For over 40 years, the Blue Man Group have provided an absolutely colorful, absurd, and comedic blend to art, music, science, and technology to stages around the world.

And this year, Blue Man Group celebrates its 20th Anniversary in Las Vegas.

The Blue Men are known for their obvious blueness and baldness, along with their random, yet eloquent use of paint, drums, food, and just pure wit to bring a show about nothing into something of meaningful value. But if you take any thing away from this very mesmerizing show, it’s the culture the Blue Men display.

It’s an eerie reminder of really how disconnected we as society have become, and a reminder that it’s never too late to change our ways. We have become too focused on judging others by the color of the skin (hell you don’t judge the Blue Men for being blue), how opinionated we are on particular social and political issues, or even our own interests that may seem just a tat bit unorthodox.

It’s All Just a Bunch of ‘Rods and Cones’

But What Does It Mean to Be ‘Blue?’

Formed back in the 1980s by Matt Goldman, Phil Stanton, and Chris Wink, these three bald “blue-men” (literally) just wanted to provide a fun, evolving form of entertainment that would get people’s eyes fixed on them.

“There really isn’t an explanation,” Goldman shared in a previous 2014 interview. “Chris dug up a picture that he drew when he was five years old, and it had three blue men in it. And I had a thing in my wallet for years with a blue tribe in South America. I don’t know why it was there; I never put pictures in my wallet. We think the Blue Man has always been here. The best answer is that we found each-other.”

Stanton added the element of “surprise” into the groups mantra:

“We thought, ‘What would surprise people?” said Stanton. “‘What’s going to catch someone’s eye and make them think?’ We thought that if we created a bald and blue character, that image would have the ability to surprise and spark some thought for a long time.”

Grit Daily has been a fan of Blue Man Group since its inception and has attended the Blue Man Group Las Vegas show for the past two years during the CES 2019 and CES 2020 trade-shows.

Grit Daily: This year marks 20 years in Vegas for you. Why is this so exciting for the group?

Thomas Randall: Before opening our show in Las Vegas we were still a bit un-known.  We had shows in New York, Boston, and Chicago so those communities knew who we were, but bringing the show to Vegas introduced the Blue Man character to both national and international audiences. To still be performing on the Las Vegas Strip so many years later is a huge milestone for us that we want to be celebrated throughout the city and alongside the community that has allowed us to entertain them for the last 20 years.

GD: Can you reflect upon the first year BMG was in Vegas, and how the group has changed and developed over the years?

TR: We were ecstatic to have the opportunity to introduce not only Las Vegas, but the entire West Coast to the show and the Blue Man character that first year.  The audience reception to three dynamic and unique characters who are not only blue, but also non-verbal, was really overwhelming in the most incredible way.  Opening a show in Las Vegas challenged us to create a heightened experience with bigger instruments, a larger band, a grander finale, etc. that pushed past the boundaries of our other shows that we had produced. Year after year we continue to explore the depths of the Blue Man character and how we can continue to amplify the creative chaos we’re known for.

Over the years, we’ve seen the Blue Man Group insert and inject technology into their shows—most recently with the group “learning how to use an iPhone” and seeing themselves on what can only be described as a weird box-like projection system, better known as a television.

GD: How does today’s culture and technology play into the BMG very purpose and their show?

TR: We never miss an opportunity to refresh our show, both for ourselves and our audiences, to keep the Blue Man character modern and relevant.   A few years ago there was a piece in our show called “TV Heads” where the Blue Men would play with analog televisions.

As technology grew more advanced in the real world the Blue Men had to evolve along with it and that’s how our GiPads came to be which are these insanely giant tablets that the Blue Men interact with.  A lot of the show speaks to pop culture and socially relevant themes so we’re always tweaking our content.

They Say Silence Is Golden, But Really, It’s Just a Timeless ‘Blue’

From its inception, the Blue Man character traits continued to develop and evolve gradually over time. Beginning with going bald and turning completely blue, the Blue Man Group rid itself early on of a trait that had no bearing in their eventual global success—ego.

Then the personality traits came along. Goldman once emphasized the “timeless” element, which also added a bit of some futuristic qualities.

“We were trying to create a character that somehow represented humanity, but was able to be outside of humanity and look at it at the same time. We wanted to make a statement about community, about the power of a group, as opposed to the American individualist mentality. We thought the character would express community through something tribal, and drumming seemed the way to go. Chris had trained as a drummed, and I was from a really musical background. We wanted to draw from our own interests and backgrounds, and bring them into some kind of performance. We wanted to express something about the process, or the impulse to create.”

Back to our conversation with Randall, we wanted to know more about the group’s decision to “stay silent,” which has famously become associated with every performance Blue Man does.

“There is always one primary mission of every Blue Man show,” Randall explained. “Every night, the Blue Men get on stage with an intention to create an environment where our audience lets down their barriers and their personal masks, and come together to celebrate life-force and experience the heightened sense of being alive.”

For this reason, Randall continued, is why the Blue Men are “silently communicating this through art, music, creation, and self-expression, which allows audiences to connect with the character in a more meaningful way.”

For years, the concept of covering their face and hands in complete blue, multiple times a day really grinded our gears. And now, we finally have our answer.

But to our surprise, the paint is just one step in the process, according to Randall.

GD: Okay, we have to know! The paint!! How long does it take to put on every day and then remove?

TR: The blue paint is definitely easier to put on than it is to remove, but it’s just one step in the process.  Getting into character is less about getting bald and blue (as we like to call it), and more about the transformation of getting into the mindset of who a Blue Man is and how they connect and interact with the outside world.

Answers to Questions You’ve Probably Wondered During the Show

For those who haven’t had the luxury of seeing the Blue Man Group on stage, it’s time you make some room for Blue in your life.

But here’s some fun answers to questions you’ve probably wondered while sitting in the crowd, wondering what the Blue Man’s next move is going to be…on stage…or even next to you.

GD: How many “Blue Men” are in your Las Vegas Cast?

TR: Here at Blue Man Group Las Vegas, we have 8 Blue Men in our cast, along with a rotating cast of 15 band members.

GD: You guys put on more shows than most. Break those numbers down for us.

TR: We don’t have regularly scheduled dark days and we perform an average of 14 shows every week.

GD: So, for a 14-show week, that’s a shit ton of streamers, Twinkies, marshmallows, and of course, paint. Right?

GD: Wow, that’s insane! Well, Thomas, thank you so very much for your time and we look forward to seeing you next time we are back in Las Vegas.

Blue Man Group Las Vegas is located at Luxor Hotel and Casino.  Tickets can be purchased online at BlueMan.com.  To stay up to date with what the Blue Men are doing “off-stage,” please check follow their crazy journey on Facebook, Instagram, Twitter, and YouTube @bluemangroup.