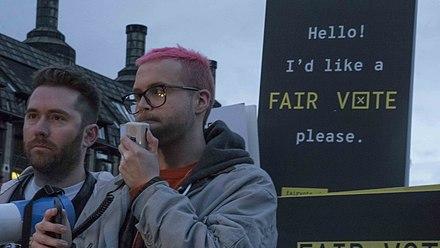 An investigation by Channel 4 News revealed that as many as 3.5 million Black voters in key swing states were targeted by the Trump Campaign in 2016 with the goal of deterring them from voting on Election Day. The revelation confirms years of speculation that the Trump campaign used Cambridge Analytica to sway the election—particularly in swing states—by using data that was obtained unethically through Facebook.

Investigators at Channel 4 revealed that the media company has obtained the cache data used by Cambridge Analytica targeted as many as 200 million Americans in different ways, but particularly focused on voters that Cambridge Analytica had determined “deterrence voters.” This means that they fit into a group of voters that the campaign wanted to deter from showing up at all on Election Day.

In particular, the data was used heavily in 16 battleground states throughout the country to help differentiate and categorize possible voters into eight different categories. Voters that were determined what the company called “deterrence voters” were then targeted with ads that would portray Hillary Clinton in a negative light. The end goal was not for voters to instead vote third party or vote for Donald Trump, but to not vote at all. 3.5 million Black voters were marked as deterrence voters for the 2016 election, suggesting that much of the voter suppression that year could be linked to the Cambridge Analytica scandal.

The complete leak of the Cambridge Analytica cache data reveals nearly 5 terabytes of data that was used against voters around the globe. Alexander Nix, the former CEO of Cambridge Analytica, has been barred from serving in a leadership role in any company for seven years. Whistleblowers of the scandal contributed to the discourse surrounding data misuse and still do to this day. A 2019 Netflix documentary titled The Great Hack detailed the scandal and provided additional context.

The Cambridge Analytica scandal that was revealed in 2018 is among one of the most prolific data misuse scandals of all time. The London-based company took data from millions of Facebook users around the world and weaponized it against them during various elections, including the 2016 U.S. Presidential Election. Facebook was eventually fined five billion dollars over its role in allowing the data harvest and misuse, and the scandal continues to shape much of the discourse surrounding social media’s role as a political propaganda tool today.