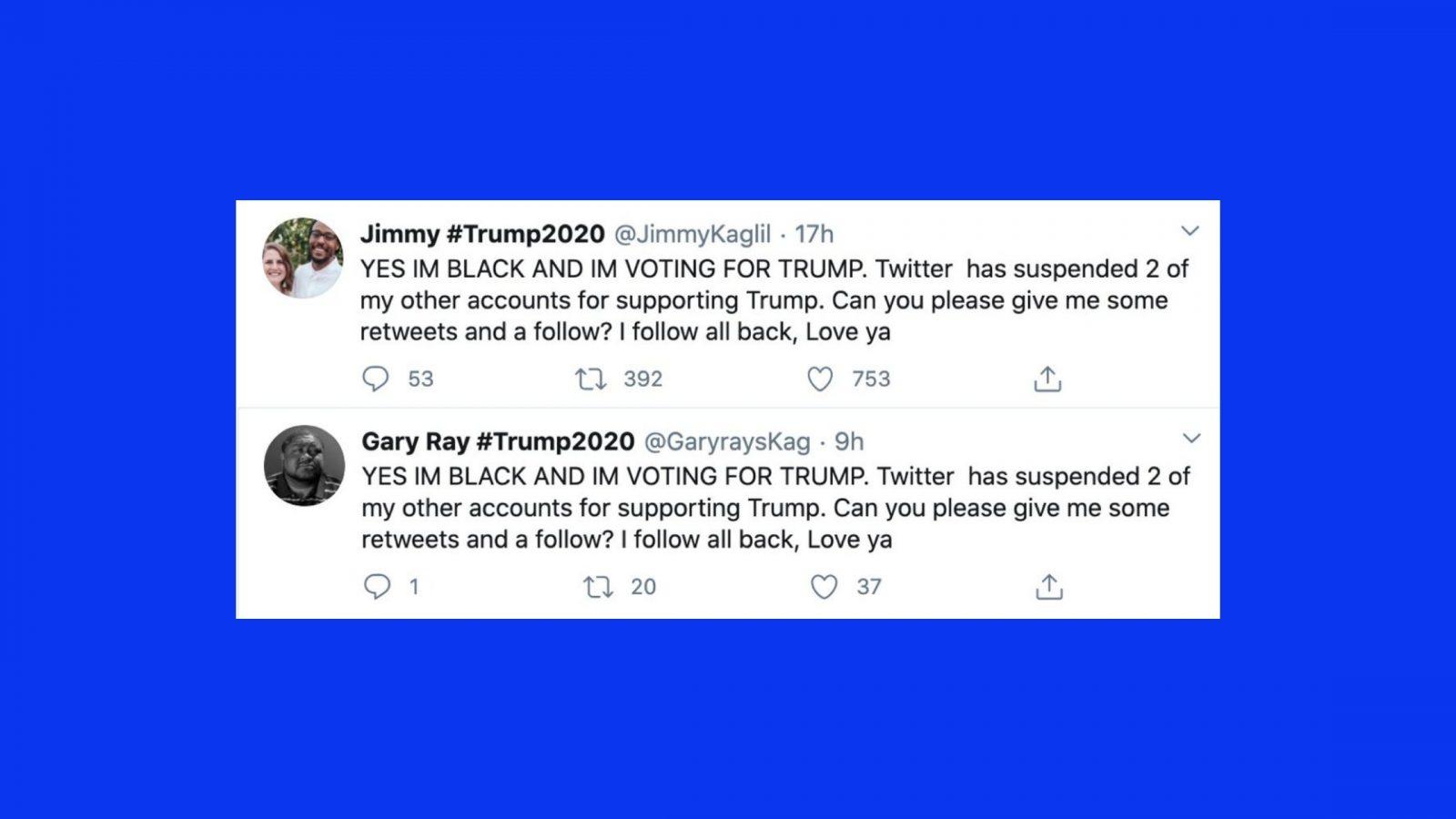 Twitter this week suspended a string of accounts that posted the same phrase “YES I’M BLACK AND I’M VOTING FOR TRUMP” after the company determined that the accounts were fake, according to The Washington Post, which first reported their own investigation on the subject. Twitter later confirmed with CNN that it had suspended the accounts, deleting the Tweets that aimed to increase perception of a strong Black support for Trump during his re-election campaign.

In recent weeks, a slew of accounts claiming to be Black Trump supporters have reached millions of users on the platform , but the posts that go viral are often copypasta—meaning that a user copied and pasted the message into a Tweet and then posted it. Copypasta is generally a surefire sign that the account posting the content might not be a real person, or is not the person it claims to be, but not always.

Many of the posts, which clarified that the users were Black and voting for Trump, also asked other users that came across the message to retweet the post in order to increase its reach. Posts with these messages usually used some form of the phrase “Twitter suspended two of my other accounts for supporting Trump,” or “Libs won’t like that and I don’t care” referring to users that retweeted the content as “Patriots.” Many of the posts have since been removed, but were apparently using real pictures of Americans that had been saved and re-uploaded from elsewhere.

This isn’t the first time that small bursts of fake Twitter accounts have attempted to create an image of a strong and diverse support for President Trump. Another string of fake accounts were suspended in August after telling people to leave the Democratic Party, alleging that it was being run by communists. One of the accounts used a photo of someone that actively worked to get the accounts suspended, as reported by NBC News.

The messaging on the Tweets that claim that Twitter has “suspended two of my other accounts for supporting Trump” falls in line with messaging used by the Trump campaign in recent weeks. President Trump and his supporters have accused social media companies like Twitter and Facebook of purposely censoring Trump’s messaging, citing an unfair bias against the President after several of his posts were flagged as misleading, false or outright harmful.

The President has actively campaigned against Twitter and Facebook in response, claiming that Section 230 of the Communications Decency Act of 1996 enables social media giants to “censor” content on their platforms. In reality, the section of the Act protects internet companies like Twitter and Facebook from being held legally liable for harmful or defamatory claims posted to their platforms. In 2016, the President’s campaign worked with Cambridge Analytica to convince Black voters in the United States not to show up to the polls on Election Day. The latest story is another example of the campaign’s struggle to garner Black support for Trump ahead of Election Day on November 3rd.