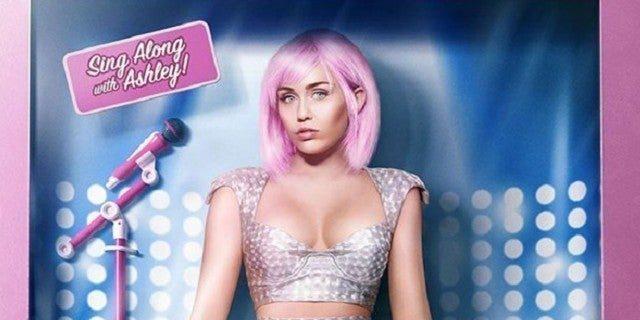 [Spoiler Alert: There are spoilers ahead for Black Mirror: Rachel, Jake, and Ashley Too)

On its surface, the Black Mirror episode “Rachel, Jake, and Ashley Too” appears to be Black Mirror’s lighthearted take on how the pop music industry can be stifling to a young artist. Miley Cyrus, who is no stranger to the impact of being forced into the limelight as a role model at a young age, stars in the episode as its proverbial pop sensation, Ashley O. Diving deeper, though, the episode highlights some very real issues in the music industry today when it comes to the separation of the artist from their art.

Rachel, Jake, and Ashley Too

The episode follows the story of Rachel (Angouri Rice) and Jack (Madison Davenport), two sisters that are battling the realities of living in a new neighborhood, going to a new school, and dealing with the loss of their mother. Rachel spends her time obsessing over her favorite pop star, Ashley O (Cyrus), while Jack spends her time playing the guitar and rolling her eyes at her younger sister. When Ashley O announces that she’s partnered with a major tech company to create a personalized robot so that her fans can have their very own version of her (called the Ashley Too), Rachel begs their father to get her one for her birthday.

Ashley, meanwhile, struggles with finding a balance between who she is and what her team has made her to be. Her brand has found the most success as a family-friendly pop sensation, but the real Ashley is having a hard time portraying that fantasy as she gets older. There is some obvious juxtaposition between the Ashley O narrative and Cyrus’ own story as a Disney Channel star-turned adult musician. Cyrus, who has repeatedly discussed Disney’s creative control of her as a brand rather than a young person, plays the character effortlessly.

When Ashley becomes ill and goes into a coma, her brand must continue on in order to stay in the limelight. In her comatose state, her team—led by her aunt Catherine (Susan Pourfar), manage to use cutting-edge technology in order to read her thoughts and translate those thoughts into new music. From there, they can use holographic projections to continue monetizing the Ashley O brand with new material despite the fact that Ashley O is, more or less, dead. It all plays out as a very dystopian-esque reality, but the truth is that it simply shows another perspective of what the music industry is already doing.

Much of the entertainment industry is dictated by what would be a lucrative investment rather than a piece of art. In the music industry, specifically, artists have to commodify their art in order to meet the needs of their record labels. Those record labels purchase projects based on the potential return on investment, rather than their artistic integrity. Cyrus’ own Miley Cyrus & Her Dead Petz, for example, did not count toward a three-album contract set by RCA Records. As a result, Cyrus released the album for free on Soundcloud. The album, which sees Cyrus belting lyrics like “Yeah I smoke pot … But I don’t give a f*ck” was a far cry from her early days as Hannah Montana. However, it was genuine to the artist Cyrus saw herself as. In Black Mirror, we see a similar side of that, when Ashley O’s team alters her [comatose] work in order to make it marketable to her audience.

We also get a glimpse into how being forced into front-running someone else’s vision impacted Ashley O’s mental health. In the show, Cyrus’ pop star character struggles with depression behind a veil of glitter, wigs, and latex outfits. Ashley is having trouble writing new music or performing. So her aunt gives her pills that will help her “become” Ashley O. It all seems very familiar to how Cyrus recounts her Disney days (minus the drugs, maybe?). But these types of stories are not exclusive to former Disney stars.

Also showcased within the episode, albeit less upfront, is the subject of posthumous work. When a Tupac hologram sauntered onstage during Snoop Dogg and Dr. Dre‘s performance at the 2012 Coachalla Festival, it signaled a new age of music. Artists could now perform even after death. Dozens of unreleased songs piled up over the course of their careers mean that record labels can continue to monetize. As Ashley O’s aunt Catherine introduces material Ashley wrote while in a coma on Black Mirror, music blogs celebrated the release of a posthumous Avicii album.

Tim Bergling, known professionally as Avicii, committed suicide in an Oman hotel room in 2018. Months later a posthumous album, titled TIM, was released. Bergling, who struggled openly with addiction and mental illness, was often thrust into unhealthy situations by default because of the extensive touring schedule that came with being one of the most successful electronic musicians in the world. For musicians in particular, being a touring artist also comes with regular exposure to drugs and alcohol. This, along with an expectation to be your brand even once the curtains go down and the lights go off, can be damaging.

Artist managers are, in theory, responsible for the welfare of their clients. But when celebrity entourage’s and nonstop party schedules are part of the artists day to day life, managers often fall short in prioritizing mental and physical health. Avicii’s story may have become a cautionary tale about the impact of a physically exhaustive career path. But Black Mirror attempts to highlight the reality of a world where being an artist no longer means producing art, but becoming a product.