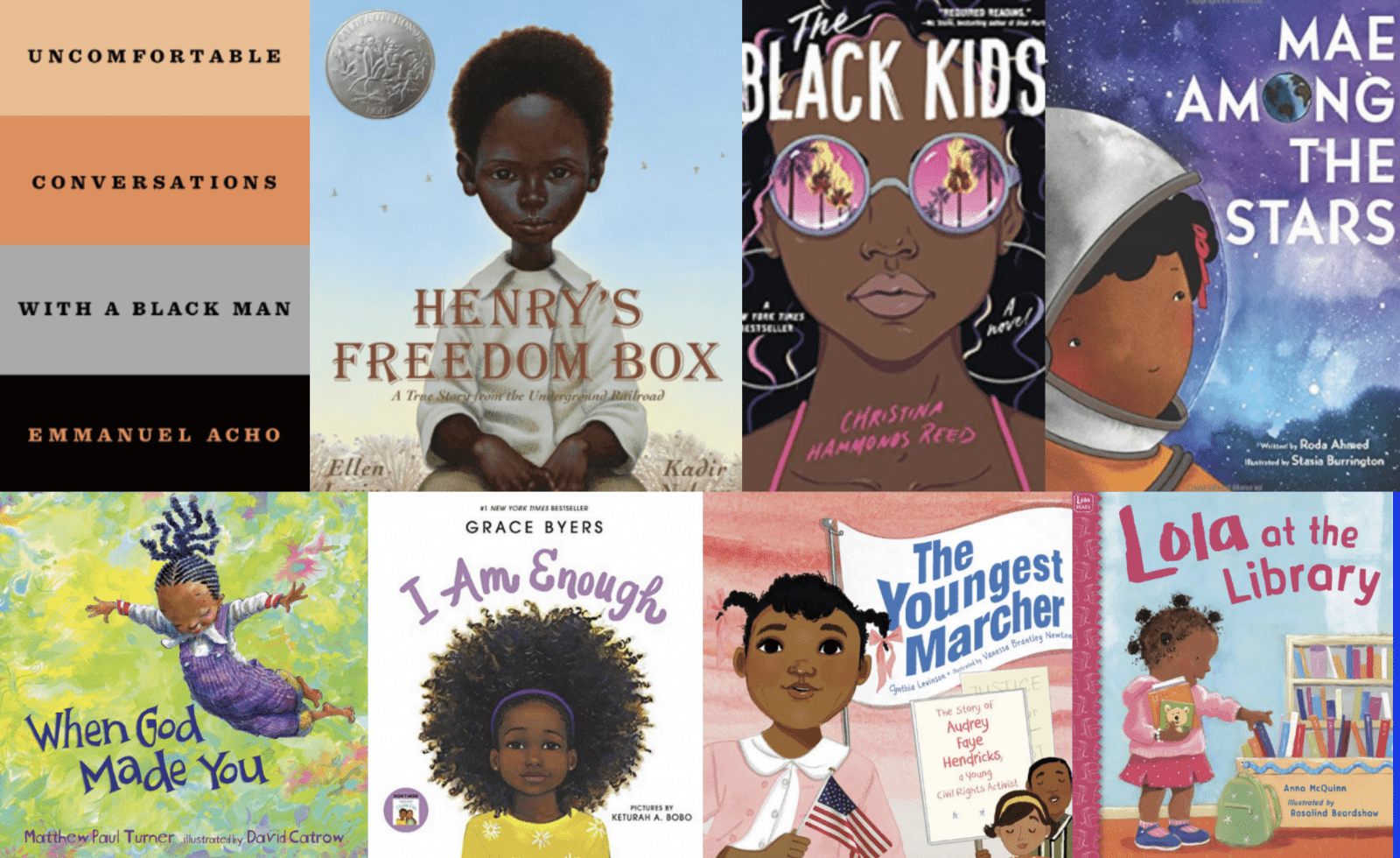 February is the month where Black history is celebrated and taught more thoroughly and memorably. There are many different ways that teachers can educate their students and even themselves on the importance of Black history in society. From the media to reading books, and even while being out in public.

Uncomfortable Conversations with a Black  Man – $13.99

This special read takes on all the questions, large and small, insensitive and taboo, many white Americans are afraid to ask―yet which all Americans need the answers to, now more than ever. With the same open-hearted generosity that has made his video series a phenomenon, Acho explains the vital core of such fraught concepts as white privilege, cultural appropriation, and “reverse racism.” In his own words, he provides a space of compassion and understanding in a discussion that can lack both.

This book is a great classroom and bedtime read-aloud, Mae Among the Stars is the perfect book for young readers who have big dreams and even bigger hearts. This book will inspire other young girls to reach for the stars, to aspire for the impossible, and to persist with childlike imagination.

From early on, children are looking to discover their place in the world and longing to understand how their personalities, traits, and talents fit in. The assurance that they are deeply loved and a unique creation in our big universe is certain to help them spread their wings and fly. Through playful, charming rhyme and vivid, fantastical illustrations, When God Made You inspires young readers to learn about their own special gifts and how they fit into God’s divine plan as they grow, explore, and begin to create for themselves.

This book is the ultimate secret recipe for self care. This gorgeous, lyrical ode to loving who you are, respecting others, and being kind to one another comes from Empire actor and activist Grace Byers and talented newcomer artist Keturah A. Bobo.

Meet the youngest known child to be arrested for a civil rights protest in Birmingham, Alabama, 1963, in this moving picture book that proves you’re never too little to make a difference. Nine-year-old Audrey Faye Hendricks intended to go places and do things like anybody else. So when she heard grown-ups talk about wiping out Birmingham’s segregation laws, she spoke up. Audrey Faye Hendricks was confident and bold and brave as can be, and hers is the remarkable and inspiring story of one child’s role in the Civil Rights Movement.

Learn about the library, checking out books, and story time with Lola.  Every Tuesday Lola and her mommy go to the library and she meets her friends there. They share books and don’t have to be quiet all the time, and the nice librarian tells stories. There is a big machine that buzzes Lola’s books in and out, and she can take any books she wants home with her. Lola and her mommy always stop for a treat on the way home. No wonder Lola loves the library.

Henry’s Freedom Box: A True Story from the Underground Railroad – $10.04

This book is a stirring, dramatic story of a slave who sails himself to freedom. Henry Brown doesn’t know how old he is, as nobody keeps records of slaves’ birthdays. All the time he dreams about freedom, but that dream seems farther away than ever when he is torn from his family and put to work in a warehouse. Henry grows up and marries, but he is again devastated when his family is sold at the slave market. Then one day, as he lifts a crate at the warehouse, he knows exactly what he must do: He will mail himself to the North. After an arduous journey in the crate, Henry finally has a birthday — his first day of freedom.

This book tells the story of a young African-American girl named Rosa who had to walk miles to her one-room schoolhouse in Alabama while white children rode to their school in a bus. It would tell how the adult Rosa rode to and from work on a segregated city bus and couldn’t sit in the same row as a white person. It would tell of the fateful day when Rosa refused to give up her seat to a white man and how that act of courage inspired others around the world to stand up for freedom.

This story is about Ashley Bennett and her friends that are living the charmed life. It’s the end of senior year and they’re spending more time at the beach than in the classroom. They can already feel the sunny days and endless possibilities of summer. Everything changes one afternoon in April, when four LAPD officers are acquitted after beating a black man named Rodney King half to death. Suddenly, Ashley’s not just one of the girls. She’s one of the black kids. As violent protests engulf LA and the city burns, Ashley tries to continue on as if life were normal. Even as her self-destructive sister gets dangerously involved in the riots. Even as the model black family façade her wealthy and prominent parents have built starts to crumble. Even as her best friends help spread a rumor that could completely derail the future of her classmate and fellow black kid, LaShawn Johnson.

This book is a funny and big-hearted books that the students will love. Twelve-year-old Shayla is allergic to trouble. All she wants to do is to follow the rules. (Oh, and she’d also like to make it through seventh grade with her best friendships intact, learn to run track, and have a cute boy see past her giant forehead.) But in junior high, it’s like all the rules have changed. Now she’s suddenly questioning who her best friends are and some people at school are saying she’s not black enough. Shay’s sister, Hana, is involved in Black Lives Matter, but Shay doesn’t think that’s for her. After experiencing a powerful protest, though, Shay decides some rules are worth breaking. She starts wearing an armband to school in support of the Black Lives movement. Soon everyone is taking sides. And she is given an ultimatum.

We hope you enjoy these Black history month books! But keep in mind, Grit Daily might take a small commission on the items recommended here—but that doesn’t mean we don’t believe in them. We only recommend products that we would buy or use ourselves, so don’t be wary of our suggestions.