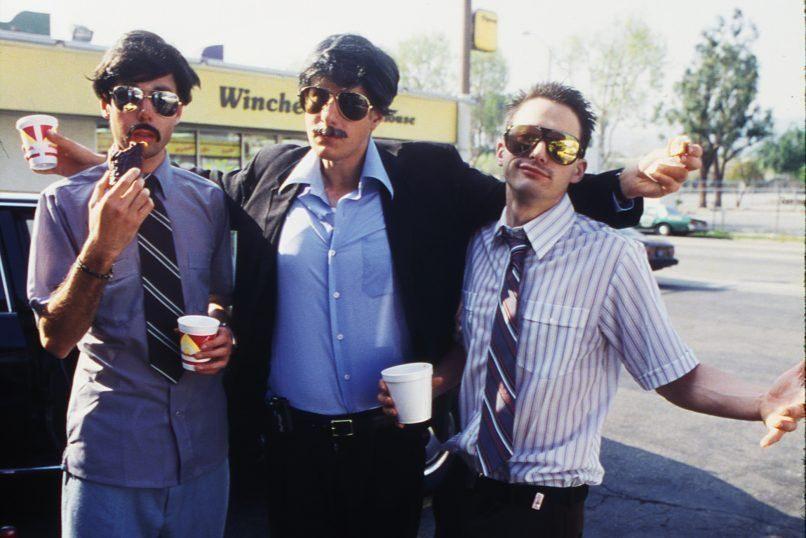 A new movie from mastermind Spike Jonze? Yes, please. The director of Her, Adaptation, and Being John Malkovich has made a Beastie Boys doc for Apple+. Jonze has a long history with Michael “Mike D” Diamond, Adam “Ad-Rock” Horovitz, and the late Adam “MCA” Yauch, so it’s only fitting Jonze directed the doc.

The doc is a “live documentary film” shot at Brooklyn’s King’s Theater. It’s where Horovitz and Diamond did a variety show of sorts last year. The event featured stories told from their mammoth biography, Beastie Boys Book, which is a must-own book for fans. The show itself was a “2 person 1 man show about 3 kids who started a band together.”

Jonze captured it all.

Looks beautiful. It helps that Jonze and whoever cut the trailer together cut it to the beauty of “I Don’t Know,” such a relaxing track off “Hello Nasty.” It’s such a different side of the Beastie Boys’ music, but then again, their music was rarely ever just one thing. With that track and seeing the band remember Yauch, it’s hard not to even get a little emotional seeing this brief glimpse at their past.

It looks like a real, unfiltered look at the past, too. The doc won’t only celebrate the band’s accomplishments and good times. Diamond and Horovitz look like they’re taking honest looks at themselves and their careers in the doc. We won’t only see the greatest hits of their lives and careers but everything.

The doc will thankfully provide rare concert footage as well. Hopefully, it’ll include some wild stories about the time they were the opening act for Madonna. The pop star’s fans had no idea how to perceive the band. Madonna’s fans weren’t happy. From the sound of it, they still had a great time regardless. ‘Cause they’re the Beastie Boys.

Spike Jonze and the Beastie Boys

The trailer begins with iconic music videos Jonze shot for the band, “Sabotage” and “Intergalactic.” The filmmaker helped shape their public persona and most famous images. It was such an exciting time in music, not just for the band. Jonze and the Beastie Boys were fresh and new, together. It was an explosive vision of what could be done in music and music videos. “I owe Beastie Boys a lot,” Jonze has said. “One time, they pulled me out of a burning ship, and another time they helped me cheat on my college exam to get into Florida State. So, it was a real privilege to get to reunite with them and help them tell their story.” How true is any of that? Knowing the Beastie Boys and Spike Jonze, who knows?

Synopsis for the Doc

“Here’s what the film is: Mike Diamond and Adam Horovitz of Beastie Boys tell you an intimate, personal story of their band, and their 40 years of friendship together. From the 1980s New York City punk scene, to ‘Fight For Your Right (to Party)’ and becoming the first hip-hop artists to make a #1 record (Licensed to Ill), through their evolution, which took them to Sabotage, Intergalactic, and beyond.

Created with their old friend, their former grandfather and collaborator, filmmaker Spike Jonze, the film seamlessly mixes a live stage show and documentary to create a new format, a live documentary. Their co-conspirator, musician, activist, inventor, discredited astrophysics professor and my favorite Beastie Boy, Adam Yauch, couldn’t be there that night because he passed away in 2012. But even though he’s not there, his spirit is very much felt onstage through Mike and Adam and the force of nature that was Yauch, their band, and their friendship.”

Beastie Boys Story opens in select IMAX theaters on April 2nd and is available on Apple TV+ on April 24th.