Are you carrying around a lot of plastic in your pocket?

Why? You should think about going metal. Yeah, it weighs more. But, if you can slim down your wallet by pulling out a bunch of plastic credit cards you don’t use anymore, replacing them with a couple metal ones, you actually come out lighter — and thinner, too. That’s what I did.

It’s not a good idea to close those old plastic accounts, by the way, as that can have a negative effect on one’s credit score. So just throw ‘em in a drawer, never to be seen again.

But the real story is the benefits you get with certain metal cards.

I first went heavy metal a few weeks ago. Wow, did I love that American Express Business Platinum Card when it arrived! It had that certain luxury feel like, you know, a fine watch or something. Kinda how I felt when I first strapped on my stainless steel Apple Watch. I get spoiled, ya know? And the unboxing experience was almost Apple-esque. No stinking envelope for this metal card!

Why did I apply for it when I already had an Amex Delta Skymiles Platinum Card? Because of a killer perk Amex added recently to this top-of-the-line Platinum Card: a free WeWork membership for a year, which allows access to any of their global locations. Not that I plan to travel that much, but I could see myself hanging out at my cool local WeWork facilities when I get tired of working in coffee shops or in my home office (and, ahem, drinking their free coffee and beer). I would undoubtedly make some great new connections there, too.

WeWork claims the value of the membership is $2700 annually, so pretty crazy, huh? Hat-tip to my friend William Harris for alerting me to this awesome perk.

So, I’m dropping that other (plastic) Amex card, which I used for business expenses and paid a card fee of $195 annually. The new card is $595 per year, so $400 more to get that WeWork perk — and a bunch of other cool benefits as well. No brainer for me.

No sooner was I just beginning to use my new Platinum Card when another card comes along — which I also now gotta have. Maybe you heard a little bit about it? Yes, um, it’s metal. Titanium. Oh, the thrill! It has no number on it, no expiration date, no security code. Just my name and a chip, baby! And, double-um, it has — are you ready? — no annual fee, no late fees, and a lower interest rate than most cards, for those who don’t pay off their balance each month.

“Pinch me — this can’t be true!!” I screamed at my MacBook Pro as I watched the big Apple Event. And did I mention it was metal? Apple has one-upped Amex (and lots of others) on this one.

You don’t even have to call some bozo salesperson to activate the card. And how about this: you just text for support — no more calling some g-damn 800 number the back of your card. Everything about it is all in your phone, securely, in Apple Wallet.

Did I mention you get cash back with every purchase — 1, 2, or 3 percent, depending on the type?

Now, the prospect of having two metal cards in my wallet, come this summer when Uncle Timmie sends me my new one, has me doing downright crazy things. Like writing this post. About credit cards. What??

Yes, this is the strange world of the Apple fanboy. Always going heavy into the latest Apple buzz. And also following every rumor about what may be coming – cough, cough, foldable phone. 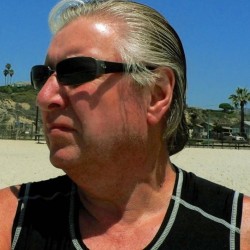