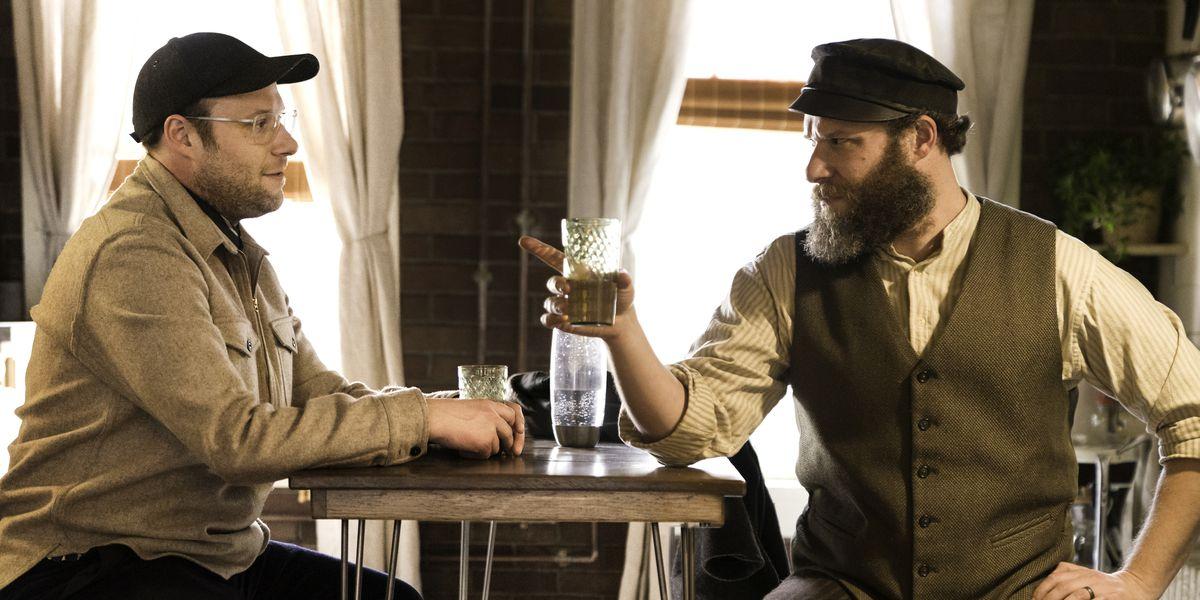 ‘An American Pickle’ is a Winning Comedy About Family, Identity, and Celebrity

An American Pical is a comedy about family, Judaism, identity, and celebrity. It’s a high-concept comedy with, like most of writer Simon Rich’s comedies, something to say. Yet again, Rich blends outlandish and the real together in such an entertaining fashion in the new Seth Rogen-led comedy. Directed by Brandon Trost, An American Pickle is a thoughtful charmer now on HBO Max.

The Magical Vat of Pickles

The logline for the adaptation of Rich’s short story is very simple: Rogen plays a man, Herschel, who falls in a vat of pickles and wakes up 100 years in the future. The story goes deeper than that, though. The large tale starts off about the importance of family and remembering them when Herschel meets his great grandson, Ben Greenbaum (Rogen, too). While their journey starts off heart-hearming, it doesn’t take long for the two men from different times to clash.

In his books and TV shows, such as Man Seeking Woman and Miracle Workers, Rich can find touching humanity in the most ridiculous of stories. He does it again in An American Pickle. This is a comedy about identity and family. In a movie about a man who stays preserved for 100 years in a vat of pickles, there’s a lot of emotion, relevancy, and intimacy. The scenes focusing on loss, in particular, effectively pull at the heartstrings.

The Mind of Simon Rich

Rich is just a fantastic writer. He’s also a surrealist writer to a degree. About 45 minutes in, An American Pickle takes a fantastic turn in which the story only gets stranger and truer.  Herschel becomes a celebrity after the great success of his pickle business. He spouts offensive, outdated beliefs, and as a result, gains a following. Subtle? No, but it’s a comedy and it’s funny as hell. It’s inherently hilarious, too, watching this story about family grow into a story about celebrity, pop culture, and you-know-who.

The more ridiculous An American Pickle gets, the better. Rich and Trost never lose sight of the heart of the story as they go bigger and weirder, either. The story manages to stay focused on Herschel and Ben, even as everything gets progressively more outlandish and meaner. An American Pickle is a comedy that has the sweet and the sour. It’s a kind comedy that hits a few mean-spirited notes gracefully. It’s a movie with a big heart and all kinds of laughs — the cruel, the heartfelt, and the outlandish.

Unlike some Rogen-led comedies, An American Pickle is tightly paced and structured, too. There’s no scenes of improv running amok and scenes going on for far too long. The HBO Max movie, which was once a Sony movie, moves fast. Trost takes his time with Rich’s story, though. An American Pickle is quickly paced and reflective at the same time, which is missing from so many comedies these days. It’s always refreshing to see a tight 90 minute comedy that doesn’t waste any time.

Only Lacking an Audience

It’s disappointing An American Pickle can’t be experienced with audiences. It’s maybe not the most commercial movie on paper. It’s not a comedy that paints in broad strokes for everyone, but then again, no comedy is for everyone. There’s a lot of laughs in An American Pickle that most likely would’ve been even bigger with an audience in a theater. The laughs are consistent, but they would’ve been all the more enjoyable in a theater. Despite COVID-19, An American Pickle was going to streaming anyway, but it’s a shame a studio isn’t willing to release a comedy as unique as this one. It’s a comedy that has so much to offer beyond just laughs.