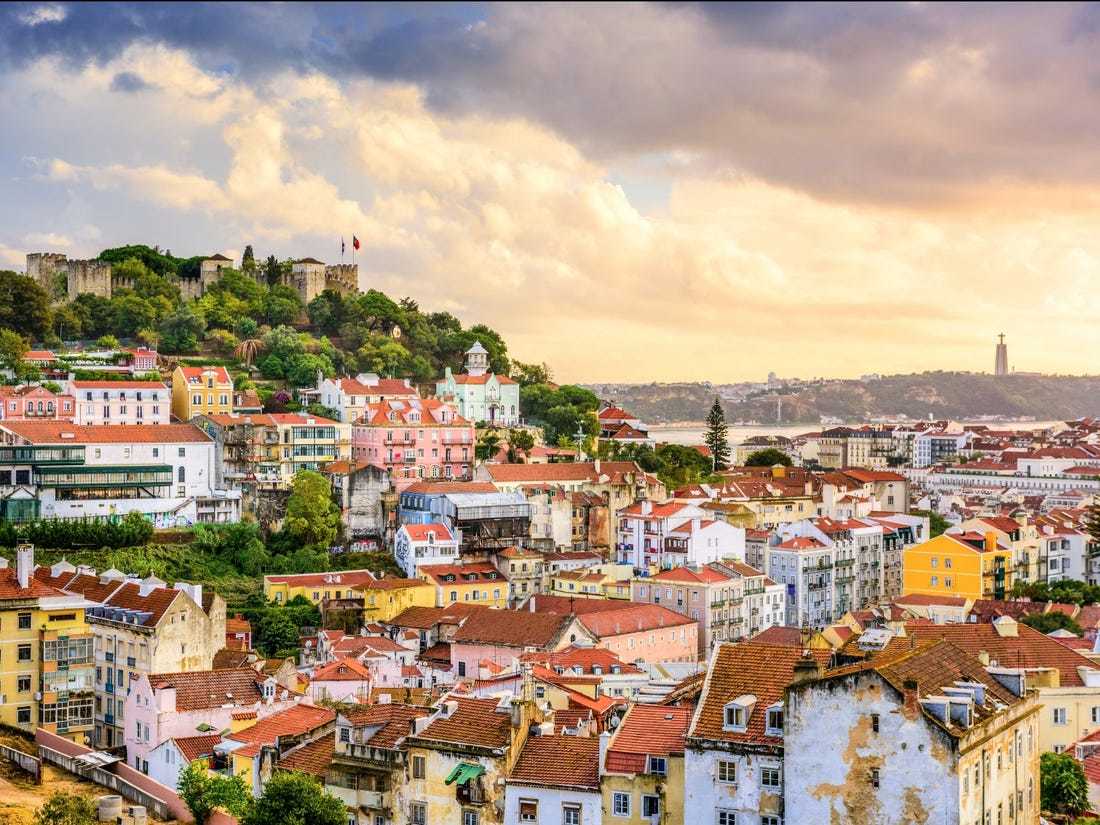 By International Living on January 5, 2020

Hollywood should shoot more films in Lisbon. The city enjoys about 2,800 glorious hours of sunshine a year. Its rolling hills and vintage tram cars could double for San Francisco. Colorful homes line the city’s cobblestone streets, offering an ideal backdrop for any romantic film.

It’s a place where it seems you might run into actors around every corner. And, if you live in Lisbon, you might just run into Ed Hooks. This U.S.-born actor moved to the Portuguese capital with his wife, Cally, last year.

“We have loved Europe for many years, so it made cultural sense for us to make the move,” says Ed. “In February 2017, we sold or gave away just about everything we owned, reduced our possessions to what would fit into 28 cardboard boxes for ship-ping, and we moved lock, stock, and barrel to Lisbon.”

As a professional actor for 30 years, Ed played parts in television shows like Knight Rider; Murder, She Wrote; and The Fall Guy.

“I was one of those character actors you see showing up frequently—the sheriff, the employment counselor, the used car salesman, the undertaker. Never a star, but I worked a lot and earned a pension from SAG/AFTRA.”

While Ed may collect a pension from the Screen Actors Guild-American Federation of Television and Radio Artists (SAG/AFTRA), he is not retired. At age 73, Ed is still doing what he loves—teaching acting for animators.

Creating animated films requires a different skill set than your typical block-buster. The talented artists who animate the characters we see in movies are not actors by trade. However, to make their creations seem life-like, the artists must think like actors. This is where Ed comes in.

“Along the way, I started teaching act-ing on a professional level, in Los Angeles, San Francisco, and Chicago, and I wrote a few books for actors,” says Ed. “Then, in 1996, I was invited for the first time to teach acting to a group of animators.”

“Animators need to understand acting as well as Anthony Hopkins does. But they do not need to train to actually act in scenes with Hopkins, themselves,” says Ed. “With that idea in my mind, I developed a way of teaching acting theory to animators instead of to actors.” Ed still teaches acting theory while living in Lisbon. He offers online coaching classes on Skype for $110 an hour—an inspiration for anyone with a skill they can teach online. (See: Edhooks.com.) A shifting global market for animation also has Ed traveling around the world to teach classes. He was recently in Changchun, China, for one month, and he travels widely around Europe to give workshops.

“We qualified for ‘retirement’ visas in Portugal. Although, as you can tell, I am not exactly retired. I am working more now than I was in Los Angeles,” says Ed.

Their pensions and U.S. Social Security income ensured that Ed and Cally qualified for the standard Portuguese retirement visa. And, because they travel and work outside the country a lot, they also qualified for, and obtained, a Non-Habitual Resident tax status. This allows them to conduct business in Portugal with a reduced tax rate of 20% on their Portuguese earnings, for 10 years, and non-Portugal earnings are tax-exempt altogether.

“We still must file U.S. tax returns, in addition to Portuguese returns,” says Ed. “But we figure we will come out essentially where we were financially, tax-wise, as when we lived in the U.S.”

With its ideal weather, lower cost of living, and international airport, Lisbon was a natural choice for Ed and Cally.

“We selected Lisbon because, first of all, it is warm,” says Ed. “After living in Chicago for a few years, we knew we definitely did not want any more freezing cold winters.”

The city is also more affordable. “The cost of living in Portugal is roughly 65% of what we were spending in Los Angeles,” says Ed.

“Here in Lisbon, we do not need a car at all,” says Ed. “Public transportation is excellent, and there is always Uber. We prefer Uber to standard taxis. You can Uber from one end of Lisbon to the other for under $6, wonderful value.”

A careless lifestyle in Lisbon also provides social opportunities for expats. Walking the city’s rolling hills offers both exercise and a chance to chat with others.

“We have been surprised at how easy it is to make new friends in Lisbon,” says Ed. “In Los Angeles, we were always rather isolated, either at home or in a car. If you wanted to see someone, you had to make an appointment.

“Here in Lisbon, Cally and I have made many new friends. As an added bonus, the people we meet here tend to be very interesting and smart. They are, by definition, international. They have often traveled even more than us!”

Outside of expat circles, English is widely spoken in Lisbon. However, when they need more Portuguese language assistance, Ed and Cally hire a local woman to help translate.

Fortunately, English can also be found at the movies. Films are screened with original soundtracks and have Portuguese subtitles. This is great both for Hollywood actors like Ed Hooks, and for anyone looking to live and earn an income overseas in Lisbon.