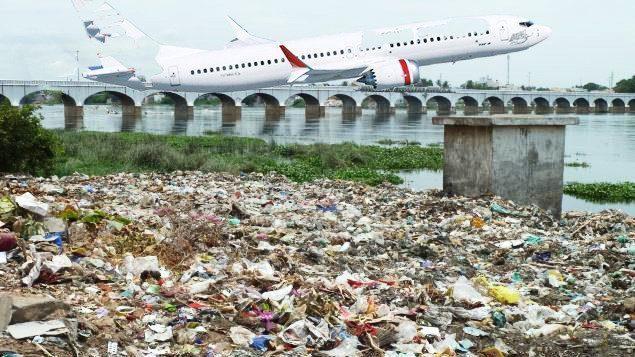 Long haul travel leaves a major carbon footprint no matter how you look at it. Even if you travel light, your carbon footprint increases significantly each time you fly. Unfortunately, flying is somewhat of a necessity for many people. Beyond the obvious greenhouse gas emissions that come from air travel, flying commercially adds to your individual carbon footprint through the waste that gets thrown away during each flight.

The Design Museum in London hopes to rethink the ways in which air travel can cut back on waste. A new exhibition at the museum challenges attendees to look differently at the airline industry and call for accountability to invest in ways that industrial design can cut back on waste created by single use packaging and plastics.

From the packaging that hot towels come wrapped in, disposable ear phones, and trays used for serving in-flight meals, airlines dispose of an estimated 5.7 million metric tons of waste per year. Plus, there is the cost of having to transport all of that waste while in the air.

The exhibition, called “Get Onboard: Reduce. Reuse. Rethink” will re imagine ways in which airlines can tweak their existing practices to be more mindful of the waste that they create. Design suggestions for compostable serving trays made from eco-friendly materials are part of the exhibition, as are things like eco-friendly reusable water bottles offered in airports, and the use of natural materials instead of plastics to combat plastic consumption worldwide.

PriestmanGoode, the industrial design company behind a lot of aviation and travel industry innovations, is based out of London and aims to incorporate sustainable design features into products that we use everyday. The company has also been at the heart of redesign projects for some of the world’s leading airlines, as well as contributing to a redesign of the London Underground train.

The newly imagined plastic-free tray presented in the exhibit at the Design Museum in London would combat single-use plastic waste significantly should it ever be implemented in any airline practice. Made from coffee grounds, the tray carries with it a variety of serving dishes and utensils made from different, all natural materials like seaweed pods and coconut wood to replace traditional plastic knives and forks.

Though PriestmanGoode is far from seeing its new serving trays become an industry standard to combat airline waste, the company has revealed that it is working with airlines to make the products a reality in the future. For now, though, the design concept serves as a spark of inspiration for consumers to rethink the ways in which they can combat their own waste contributions in new ways.