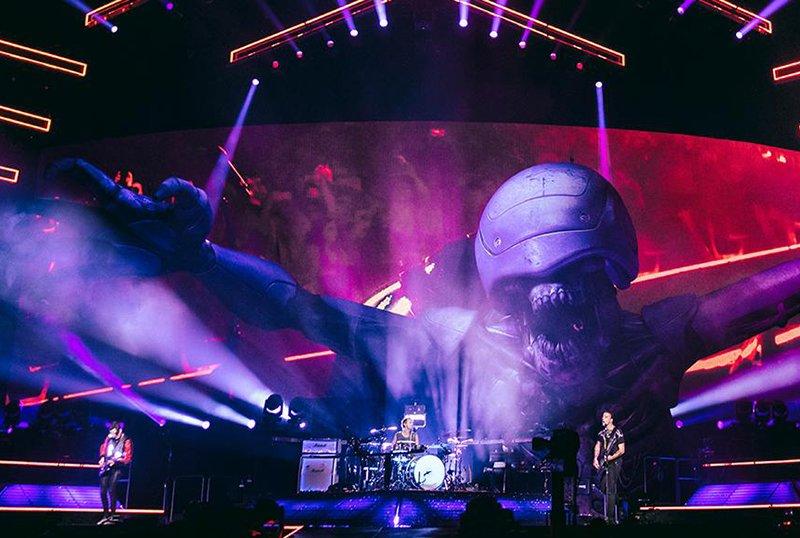 A Muse Concert​ Movie is Coming to IMAX Next Week

Muse has a movie coming to IMAX Theaters. The commercial rock band, which has produced an array of radio hits heard too much in movies, shot a sci-fi concert film. The movie blends concert footage from their most recent tour and a narrative about a world gone to hell. It’s like another IMAX concert film, Metallica’s Through the Never.

The movie is based on the band’s 2018 album “Simulation Theory.” It’s a fun album but a great tour. More than a million people attended their epic live shows for the album. The band’s trio has compared their movie to The Wall, which the late Alan Parker directed. Muse’s IMAX movie was shot at London’s iconic 02 Arena. It was directed by Lance Drake, too, who’s collaborated with the band in the past.

No Muse fan will ever stop reminding you how good the band is in concert. They usually don’t rave about the band’s albums first, it’s the tours they talk about. Those fans are correct. Speaking as someone who only casually enjoys the band’s radio hits, their Simulation Theory tour was fantastic. It is one of the best large-scale modern rock shows I’ve seen. It’s borderline sensory overlord with the band playing up an ‘80s cyberpunk aesthetic. They go big with their shows, making their show just right for IMAX. The tour’s grand finale, in particular, will look great on the gigantic screen. Few tours are as aesthetically pleasing, unabashedly unironic, and cyberpunk as Muse’s Stimulation Theory show. The band went all out. They give people their money’s worth. Plus, they play some John Carpenter scores before a show, which sets the mood just right for the ’80s vibe of the show.

The movie’s narrative follows “follows a team of scientists as they investigate the source of a paranormal anomaly appearing around the world.” The story blurs “the lines between narrative and concert film, virtual and reality.” Obviously, it’s a little startling in the trailer to see a virus taking over people’s lives. As the band’s frontman Matt Bellamy told NME, the narrative side of the film was shot pre-COVID-10:

“It’s a cool film set in the ‘80s sci-fi world of the last album. We made it before [COVID-19] happened, but it does contain themes about a virus taking over people’s reality.”

MUSE – Simulation Theory: The IMAX Experience opens in select IMAX thaters on August 17th before being hitting digital days later. Thankfully, Muse fans can catch the movie on iTunes days later after its IMAX debut. It’s not a good time to go to the IMAX theater or a theater in general, although they plan on reopening next weekend. We’ll see about that.Based on the tour’s dazzling visuals and booming sound, though, IMAX would be the way to experience the movie. Too bad it’s not coming out next year to watch with a full crowd of Muse fans.

“Muse – Simulation Theory: The IMAX Experience” is an exclusive, strictly limited IMAX engagement of a new and innovative concert film event developed and produced by MUSE. The film includes a never-before-heard score accompanying MUSE’s historic 28 country Simulation Theory Tour from February to October of 2019 and features 22 songs. It’s intercut with a new thrilling and visually stunning narrative production that follows a team of scientists investigating a paranormal anomaly in a search to save humanity.

The film has also undergone IMAX’s cutting-edge propriety Digital Media Re-Mastering (DMR) and sound mixing process to take advantage of the stunning visuals and preceision audio of the IMAX® Experience. In IMAX, MUSE fans and more will be immersed in a supernatural spectacle of unmatched scope and clarity, surrounded by next-generation precision audio that delivers pitch-perfect tuning and pin-point accuracy in custom-designed IMAX theatres.