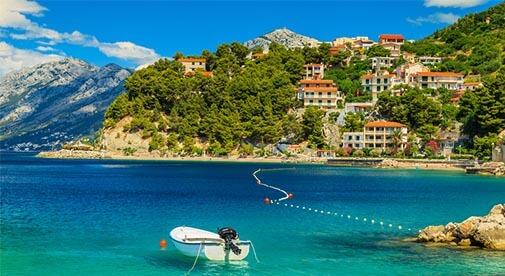 6 Things to do Along Croatia’s Makarska Riviera

The Makarska Riviera has been a magnet for sun and fun-seekers for generations. This rocky coastline in southeastern Europe has a fantastic mix of beaches, hiking trails, and historical sites.

If you’re thinking about visiting or living along this stretch of coast in Croatia, here are six ideas for the types of things you can do.

The Makarska Riviera is about 37 miles of undulating coastline. It stretches from the town of Brela in the north to Gradac in the south. In the center is the ancient town of Makarska—the riviera’s crown jewel.

Makarska is situated on a small slice of land sandwiched between the Adriatic Sea and the steep hillsides of the Biokovo mountain range. With long stretches of pebbly beaches, Makarska is popular with sun and water enthusiasts.

The region receives a bountiful 2,630 hours of sunshine every year. This abundance of vitamin D attracts beach-going tourists from around the world.

This even includes those seeking a tan—without tan lines. Several nudist beaches can be found along the coast hidden amidst rocky enclaves.

Sailing is also a vibrant industry along the Makarska Riviera. Several marinas are sprinkled along the coast. Each offer daily or weekly charters.

The unique topography of the Makarska Riviera presents hikers with a cornucopia of dramatic trails to explore. From steep ascents up the rocky slopes of Biokovo to scenic strolls through endless olive groves, there is a footpath for every hiker.

Using the satellite view of Google Maps, you’ll be able to make out well-worn trails throughout the region. Each path invariably has incredible views of the azure Adriatic Sea.

My wife, Tricia, and I hiked several times during our time in Makarska. One of our favorites was a relatively easy route to the village of Kotišina. Here, we found a small castle built into a cliff that was used to protect villagers from Ottoman attacks over 400 years ago.

Today, the villagers are far more welcoming to outlanders. We discovered a group of gentlemen playing bocce ball in the town center. Seeing our interest, they quickly invited us to a game and a glass of local wine.

The Makarska Riviera has a history dating back at least 8,000 years. While it may lack large historical sites such as Diocletian’s Palace in the nearby city of Split or the Great Wall of Ston near Dubrovnik, it does have a sprinkling of smaller sites.

About a half hour’s drive from Makarska is the small seaside village of Drvenik. Perched on a rocky outcrop above the village is a fortress of the same name. It was here in the 1600s that the women of the village made a brave stand against overwhelming Ottoman forces.

Just up the coast from Drvenik and only a few miles from Makarska is the village of Tučepi. Founded on the ruins of an ancient Roman villa, Tučepi has been inhabited for millennia. In the summertime, Tučepi is filled with the sounds of klapa—a traditional form of Croatian a cappella singing.

The town of Makarska is a historical hotspot. The forested park of Saint Peter, with its dramatic cliffs plunging into the sea, was settled by the Phoenicians 4,500 years ago.

With a beautiful natural harbor, Makarska has a long maritime tradition. It has been occupied by many seafaring civilizations, including the Ottomans, the Venetians, the French, and the Austro-Hungarians. It was even a pirate’s lair for centuries.

Despite its small size, the town of Makarska has several interesting cultural sites, including a city museum, a shell museum, and an astronomical observatory.

The city museum is housed in an 18th century Venetian palace. It contains artifacts recovered from archaeological digs along the entire riviera. These treasures include wine amphoras, bronze trinkets, and stone carvings.

Located inside a Franciscan monastery, Makarska’s Shell Museum is a testament to the town’s connection to the sea. Inside, you’ll find a collection of over 3,000 different shells, including the former home of a giant clam.

If you are captivated by the night sky, Makarska has an astronomical observatory. It was built in 1974 alongside a World War II memorial. The telescopes inside the observatory take advantage of Makarska’s low levels of light pollution and frequently clear skies.

Biokovo is a rugged, mountainous park filled with diverse wildlife and vegetation. The park encompasses 74 square miles and towers over the Makarska Riviera.

In the early 1900s, Biokovo was the main supplier of ice for the local tourism industry. A daring band of ice harvesters and their donkeys would ascend Biokovo at night and carve out large blocks of cave ice hidden from the summertime sun. Risking deadly falls, they would then carry the ice back down to the beach resorts by morning.

Today, Biokovo is especially known for its panoramic views. A new skywalk is being built over a steep cliff that promises to offer stunning photo opportunities.

The skywalk will also have a glass bottom to offer an added thrill for the acrophobic.

The cuisine of the Makarska Riviera is a picture-perfect example of the Mediterranean diet. Fresh fish, vegetables, potatoes, fruits, nuts, and olive oil can be all found in abundance.

At the Makarska green market, you’ll have a chance to purchase locally produced delights including olive oil, lavender, wine, and carob pods. Depending upon the season, you may even find fresh kiwi, pomegranate, tangerines, lemons, and quince.

In the cooler months, keep your eyes open for bags full of leafy greens and bundles of asparagus. These gems are picked in the wild and are deliciously organic.

If you’re planning a trip to this corner of Croatia, these six ideas will hopefully get you started in your research. No matter what your preference is, you will certainly find something exciting to do along the Makarska Riviera.

Related: Things to Do in Vietnam

The article 6 Things to do Along Croatia’s Makarska Riviera by Shawn P. Mitchell first appeared on International Living.