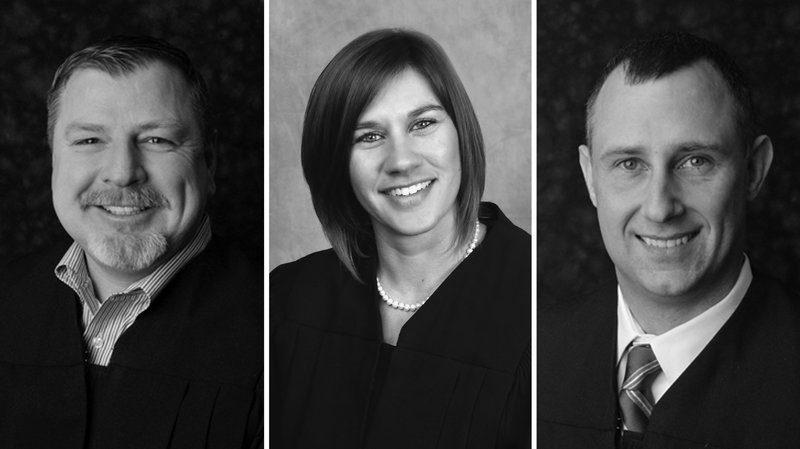 The Time 3 Judges Went to a Strip Club, White Castle, Got Shot, and Are Temporarily Suspended from the Bench

Now this is the story of about how three judge’s lives got flipped turned upside down (chorus to The Fresh Prince of Bel-Air)…. all in one night, full of booze, a trip to the strip club, burger, and gunfire…resulting in two of the three judges getting shot.

Meet Judges Andrew Adams, Bradley Jacobs, and Sabrina Bell, who back in May on the eve of a judicial conference, went out drinking, attempted to visit an Indiana strip club, and ended up in a violent brawl in the parking lot of an Indianapolis White Castle. Evidently, their behavior was anything but “judicial.”

The following is an edited recollection of the April 30, 2019 incident, according to the Opinion:

On the evening of April 30, 2019, Judges Adams, Jacobs, and Bell drove to Indianapolis to attend the Spring Judicial College conference the following day. Out and about that evening socializing with other judicial officers and drinking, the three judges continued their “judicial escapades” and met Clark Circuit Court Magistrate, William Dawkins at a local bar around 12:30 a.m. on May 1, where they continued drinking.

It wasn’t until 3:00 a.m. that the group attempted to walk up to the Red Garter, a local strip club, but discovered it had closed. They then walked to a nearby White Castle while Magistrate Dawkins went inside. The rest of the group, standing outside, were greeted by a vehicle who drove past them, shouting something outside the window. Responding, Judge Bell gave the two individuals, Alfredo Vazquez and Brandon Kaiser, the middle finger, who then pulled into the White Castle parking lot and got out of their vehicle.

Judge Bell, intoxicated, with no recollection of the incident, admitted that the restaurant’s security camera would show her making such a gesture. A heated verbal altercation ensured, with everyone yelling at one another, using profanity, and making “dismissive, mocking, or insolent gestures toward the other group.” At no point in time did the judges leave the scene or attempt to minimize the confrontation.

It wasn’t until Judge Bell and Vazquez got into their verbal exchange, did a physical confrontation ensue. At one point, Judge Jacobs had Kaiser pinned on the ground—raising his fist back and saying words to the effect of “Okay, okay, we’re done, we’re done,” or “This is over. Tell me this is over,” or words to that effect. The confrontation finally ended when Kaiser pulled out a gun, shot Judge Adams once and Judge Jacobs twice. For some reason, they left Judge Bell alone, even though her middle finger gave rise to the entire incident.

Judge Adams and Judge Jacobs were transported to local hospitals for treatment of their serious injuries. Judge Adams, who sustained a single gunshot wound to his abdomen, underwent two emergency surgeries, including a colon sectioning. He had a serum blood alcohol level of 0.213, or approximately 0.157 using whole blood.

Judge Jacobs, on the other hand, who sustained two gunshot wounds to the chest, also has two emergency surgeries, but was in the hospital for two weeks. His serum blood alcohol level was 0.177, or approximately 0.13 using whole blood.

Meanwhile Judge Bell who was so intoxicated she had no recollection of the entire incident, never had her blood alcohol level tested. She remained on the scene after the incident to speak with police, and later taken into custody to give her recorded statement.

That same day, Judge Adams was suspended from the bench by the Indiana Supreme Court subject to Indiana Admission and Discipline Rule 25(V)(A), which provides that a judicial officer shall be suspended with pay “upon the filing of an indictment or information charging the judicial officer…with a crime punishable as a felony under the laws of Indiana or the United States.”

In his plea agreement, Judge Adams admitted to kicking Kaiser in a “rude, insolent, or angry manner” on May 1, 2019, resulting in bodily injury, or pain to Kaiser.

Judge Jacobs was also the subject of a grand jury investigation in June of that same year, but no criminal charges were filed against him.

According to the Opinion, the Judges’ conduct violated Rules 1.1, 1.2, and 3.1(C) of the Code of Judicial Conduct, holding that:

“Our legal system ‘is based upon the principle that an independent, impartial, and competent judiciary, composed of men and women of integrity, will interpret and apply the law that governs our society.’ Ind. Code of Judicial Conduct, Preamble. The effectiveness of the judiciary ultimately rests on the trust and confidence that citizens confer on judges. Judges, therefore, must remain vigilant to guard against any actions that erode that public trust. Respondents’ alcohol-fueled actions during the early morning hours of May 1, 2019, fell far short of the Code’s directive to Indiana Supreme Court | Case Nos. 19S-JD-386, -566, -567 | November 12, 2019 Page 6 of 8 ‘aspire at all times to conduct that ensures the greatest possible public confidence in their independence, impartiality, integrity, and competence.’”

All three judges received suspensions but will eventually return to the bench—which is beyond my understanding. The legal consequences here just seem straight up fucked.

Judge Adams, who was the only judge criminally charged in the case, pleaded guilty to one count of misdemeanor battery in September.

He received a sentence of one year in jail, and a credit for two days served. The remaining 363 days of his sentence were suspended. However, he was suspended from the bench without pay for 60 days, beginning Tuesday, according to the court.

He will be reinstated as judge of the Clark Circuit Court 1 on January 13, 2020.

Judges Jacobs and Bell will both be suspended without pay for 30 days, beginning November 22, and reinstated to their respective courts in Clark and Crawford counties on December 23.

The Clark County Circuit Courts have expressed its support of the Indiana Supreme Court’s Opinion, according to an emailed statement by Jill Acklin, the Clark Circuit Courts court administrator.

“We will fully cooperate with and are ready to assist the senior judges assigned to those courts during the suspensions of Judges Adams and Jacobs,” Acklin said in the statement.

But, why are they not suspended indefinitely from their respective courts? It’s troubling to say the least that these judges still have the ability to return to their seats and now “attempt” to hold accountable, countless others who now, or in the future, may reflect similar behaviors as they did.

It’s the pot calling the kettle black—the level of respect these judges will be shown moving forward as it pertains to their judicial capacity, will be significantly diminished.

The High Court’s Opinion addressed some mitigating factors that led it to its final decision:

“The purpose of judicial discipline is not primarily to punish a judge,” the Opinion stated, adding, “but rather to preserve the integrity of and public confidence in the judicial system and, when necessary, safeguard the bench and public from those who are unfit.” In re Hawkins, 902 N.E.2d 231, 244 (Ind. 2009). “The sanction must be designed to deter similar misconduct and assure the public that judicial misconduct will not be condoned.”